Thinking about picking up a new or used bike to hit the local trails(Dogtown/Ravenswood primarily) this year-- My trusty old Giant Yukon ('96) has been a great bike, but its probably time for a major overhaul.   Some things have changed over the last decade in the world of mtn bikes, and i'm coming up to speed with the latest and greatest -- while trying to also keep costs under control.

Disc brakes -- similar to motorcycle and car brakes, pad brakes are hard to find on intermediate+ bikes today...  stopping power seems to be good, but it does feel a bit different....

Suspension -- front suspensions are pretty popular, you get some extra shock absorbancy for downhills, but they are actually wasteful when you are on flat pavement or climbing uphill as some energy is lost.  some front suspensions have a 'lock-out' feature which allows you to lock your front fork solid.  rear suspension seems like a bit overkill for what I need, and it also adds costs and similar energy waste in most of the cases.  Front and rear suspension seems to be most important for big jumps/drops, or mountainous downhill which I'm not really into (yet?).

Wheels - the 29er... the standard 26" wheel is being seriously challenged by a larger wheel, the 29" aka 29er.....  It makes the ride feel a bit different, and I think deserves some consideration as I make my choice...
Gears--  some folks are jumping on an old school single-gear 1-speed bandwagon, personally I'm not seeing the appeal here -- i'll stick to my 18 or 24 speeds and rapid fire shifting...

thoughts?  I haven't decided yet if the 29er or front suspension is something I would enjoy-

Here are some that are in the running.... 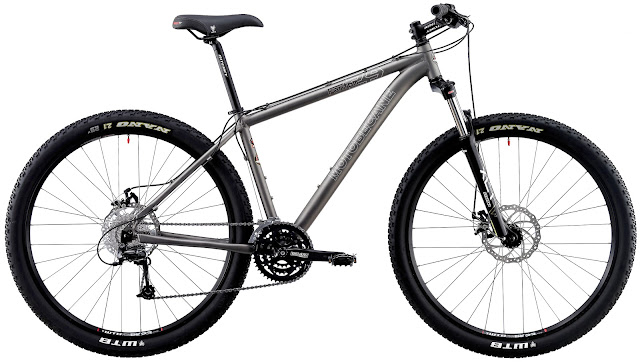 I ended up with a 19" aluminum frame 29er created by Motobecane, it includes a front suspension fork by Suntour (XCT V3 29) with 100mm of travel.  The front fork is considerend entry level, but it does have 'lockout' which allows it to be locked and perform similar to a fixed front suspension althoug it is most likely heavier.  The rear derailler is Shimano Deore, front Shimano Alivio -- it has Shimano Alivio rapid fire trigger shifting and a 27 speed Shimano cassette.  The wheels are 29" with quick release hubs, and it comes with Tektro Novela disc brakes.  Looking forward to giving it a spin! Some more detailed pics.