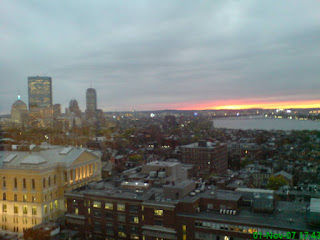 This post will be about Boston, and why I love my home city. Typing on my cellphone wont cut it, so for now i leave you with a picture of the eve!


Update: (Few months later...)
Well, it's a bit colder now... but being an avid snowboarding fiend sort of makes this cold weather make me feel like I am in my element.. Well I was born up in Maine. Boston in the winter is cold, you dress for it, and just deal with it -- The train gets you into the city quickly, I can hop out on the commuter rail to enjoy a nice evening at the beach in Gloucester... or if I'm working late, just hop over a few stops within Boston. Driving in, I guess is a different story... I've done it once, and that was enough to not do it again... On the train, the time is yours to read, think, write, or just zone out to some of your favorite music. Not to mention the environmental impact and cost of commuting by car.... Once you are in town, getting around is quick. Being frugal, Taxi/Limo are not usually the norm. Walking preferred, but sometimes wind up using my monthly T pass to get around a bit further quickly... Coffee, get your fresh beans at your favorite shop. Restaurants, I have a good one for each day of the week, or even month to try out... I bring in left-overs whenever possible, but it allows for the occasional lunchtime splurge (hey, after-all mantinee 's are cheaper than primetime). Fridays vegetable market deals, Northends Ernesto pizza, Chinatown's Pho Pasteur's noodle soup, West Ends Vivo Burritos, Downtowns Al's subs, Artu's of Charles St's prosciutto mozzarella, Scollay's squares Beacon Hill elegance -- Ok, I guess I can go on about food for a while... Amante amare, no?

I think I save the rest of the city's great characteristics for a future post, I'm now feeling pretty hungry...

Email ThisBlogThis!Share to TwitterShare to FacebookShare to Pinterest
Labels: boston