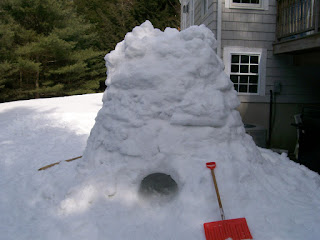 Well after hearing that bad news about Grandpa, I had to get out of the house and do something constructive but creative... After all, Gramps was an engineer too... Stepping on the snow in the backyard, gave me the idea to carve out blocks and build an igloo in true eskimo style(or at least try to)... Traditionally as a kid, I would tend to make more snow caves -- sort of a miners approach which yielded a less structurally stable fort digging into the side of a giant snowpile. It got tricky towards the top to build an arched dome roof -- especially as it approached the 8ft tall mark.

It was a lot of work, but my sister Kathleen helped me out and it turned out pretty good!
Posted by g michael amante at 1:03 AM