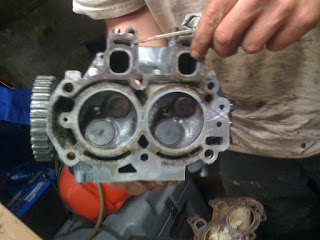 Above you see the valves and ends of the spark plugs, below we have the top of the two pistons. The area Bram is pointing out with a screwdriver is one of the sections that was clogged. 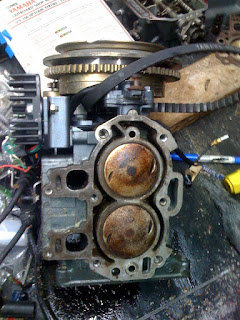 After isolating the cooling problem somewhere into the head, it was time to go in and plan on finding some problem with the head gasket. In the passageway of the head where the water exits, there were heavy salt deposits -- soo much so that one of the passages was completely blocked solid, and the other one was also pretty clogged. We think(hope) that was the problem. It looks like that could have been caused by the head gasket being previously 'repaired' instead of completely replaced.
Posted by g michael amante at 9:58 AM